More than 3.7 million diners were seated in May via Yelp, the highest amount the company has ever recorded, even when compared to pre-pandemic highs.

It remains clear, however, that popular trends during the COVID pandemic are here to stay. Yelp found that consumer interest in personal chefs and food delivery services from March through May of this year grew 138 percent and 189 percent, respectively, compared to 2019. 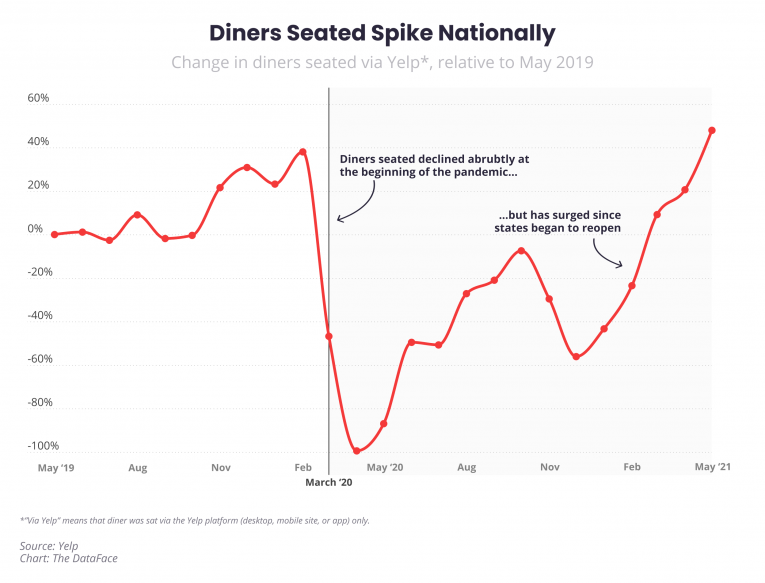 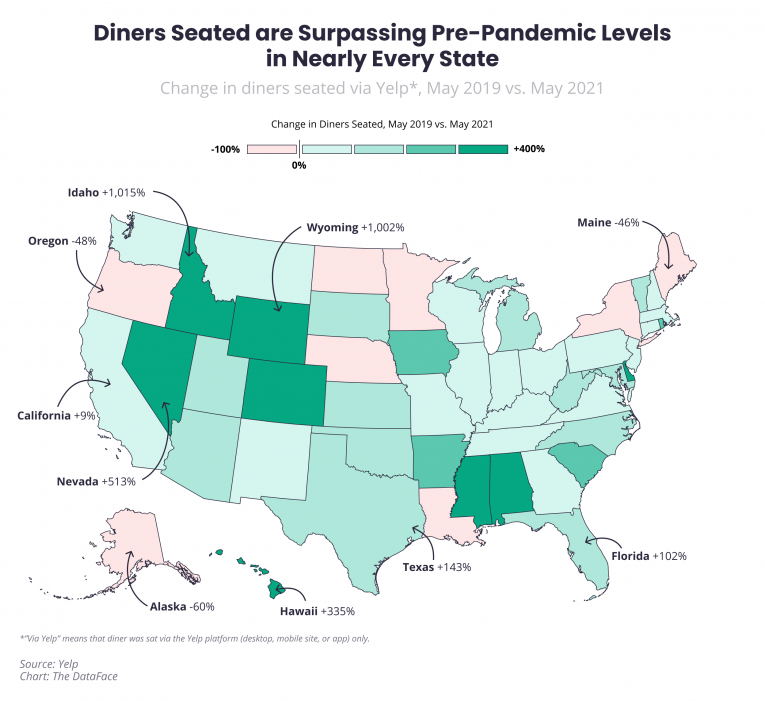 Restaurant operators feel more confident, as well. Nearly 6,600 new restaurant and food businesses opened in May, or a 42 percent increase compared to 2020 and a decrease of just 21 percent compared to 2019. In addition, 16,500 businesses reopened in April, the highest amount since April 2020 when 24,001 restaurant and food businesses reopened. In May, 5,027 reopened, which is the fifth-highest amount since the pandemic began.

The accelerating numbers reflect the current phase of the pandemic in the U.S., which appears to be in its final stages. On Tuesday, the seven-day moving average for COVID cases was 11,282, a level that’s comparable to late March 2020. As of Wednesday, 150.8 million Americans were fully vaccinated, or 45.4 percent of the total population.

Restaurants have rattled off 13 straight weeks of positive same-store sales compared to 2019 through the week ending June 13, according to Black Box Intelligence. However, full-service segments experienced negative comps growth for the first time since mid-March because of an unfavorable shift in Father’s Day. Average check continues to accelerate while same-store traffic remains negative.

While restaurants encounter growing pent-up demand from consumers, operators are wrestling with the ongoing labor shortage and rising commodity costs.

The number of job openings across the U.S. reached a record-high 9.3 million on the final business day of April, according to the Bureau of Labor Statistics. The data is part of the agency’s monthly Job Openings and Labor Turnover Survey. April was the highest amount since the series began in December 2000. The previous record occurred in March, when there were 8.1 million openings. Many operators have blamed the crisis on the weekly $300 unemployment boost from the federal government, which is scheduled to end in September. But roughly 25 states are ending the enhanced benefit early—12 of them have already done so.

Regarding commodity costs, the price of beef (14.5 percent), pork (9.6 percent), fresh fruits and melons (9.3 percent), processed poultry (5.4 percent), and dairy products (3.2 percent) all increased from March to April, according to the Bureau of Labor Statistics. For chicken chains specifically, rising costs and shortages have led to innovation. For example, Smokey Bones’ virtual brand The Wing Experience rolled out Whole Wings, which features cheaper parts of the bird. On the quick-service side, Wingstop essentially did the same when it introduced Thighstop, a new virtual brand that sells bone-in and boneless thighs.