Through the first half of 2021, KFC U.S. has opened a net of three stores.

That may not sound like much, but it’s the best growth rate the chicken chain has seen in 17 years, and it’s expected to continue. The domestic market has the largest pipeline of new build sites in more than a decade and is set up for net unit growth going forward. KFC ended the second quarter with 3,946 restaurants domestically, including 3,900 franchised stores and 46 corporate outlets.

Chief Development Officer Brian Cahoe attributes the renewed push to advertising, modernization of the menu, improvement in operations, and asset remodeling. To elaborate on the last point, since KFC launched its new elevated American Showman design a few years ago, 66 percent of the U.S. system was remodeled, showing broad-scale acceptance among the franchise community.

The chicken chain’s momentum dates back to Q4 2019, when the brand opened a net of 17 restaurants to close out the year. In 2019, the U.S. system shuttered a net of nine stores, compared to net closures of 35, 58, and 103, in 2018, 2017, and 2016, respectively. The development pace was largely disrupted during the pandemic-riddled 2020, with a net of 122 restaurants shutting down. But as normal conditions returned, the foundation KFC spent years building emerged, and pre-COVID momentum returned.

“It’s all a function of that foundation of a solid partnership with the franchise system, executing on operations, developing new, relevant menu products, and certainly the digitization of the asset, as we’ve learned, post-pandemic,” Cahoe says. “All those things collectively are helping drive the growth, as well.”

Here’s how KFC has progressed in the past two decades, per BTIG:

Digital growth is certainly one of the biggest factors behind KFC’s current expansion efforts. The channel skyrocketed to more than $10 billion in 2020, a 72 percent increase year-over-year, and now mixes more than 40 percent. In the first quarter of this year, the brand earned $3 billion in digital sales. Earlier in 2021, the chain launched its own e-commerce platform and rolled out the first KFC app in the U.S., in addition to its strong relationships with primary third-party delivery providers.

In recognition of this digital explosion, KFC has renewed its attention on off-premises focused urban inline locations in metropolitan areas across the country. Prior to the pandemic, the company opened its first urban store in quite some time in the Bronx. Through 2022, KFC will accelerate development in these markets to reach a younger and diverse customer base, including six stores in places like St. Louis, Queens, Harlem, Chinatown, and Baldwin Park, California.

“If you flash back to 2019 when that [Bronx] restaurant opened, we were just at the very start of all that [digital innovation] versus today all that is in place now,” Cahoe says. “So as these restaurants open, the foundational unlock of the access through those digital channels is there. And on top of that, as the brand then grows the channel mix in that space, we certainly see in the urban environment the channel mix in digital and pickup is going to be higher than suburban because you’ve got the drive-thru. As we see that growth opportunity in that channel mix, and design these assets to efficiently produce and deliver the product through those channel mixes, we think we’ve got a great opportunity to grow in this type of asset.” 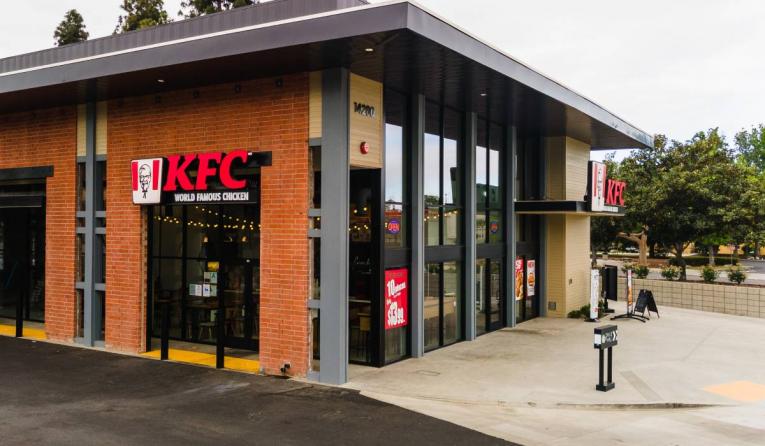 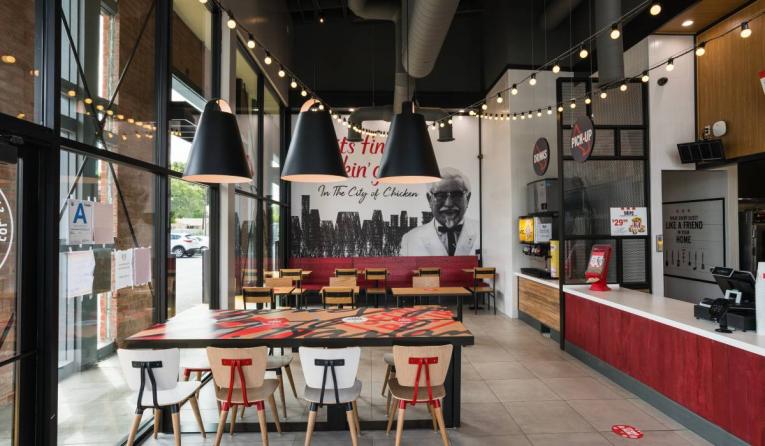 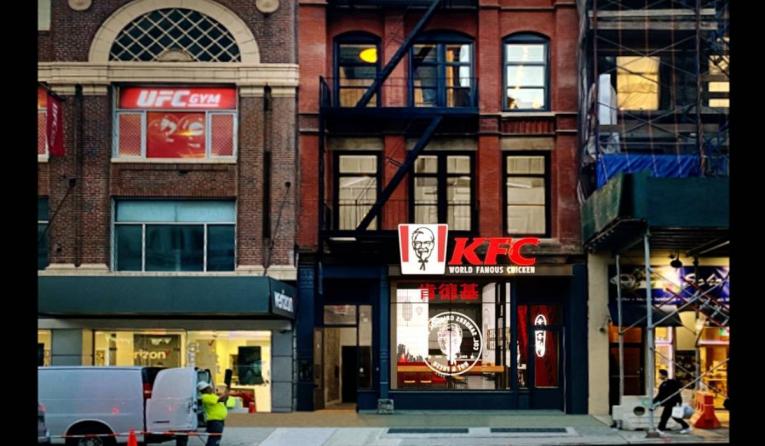 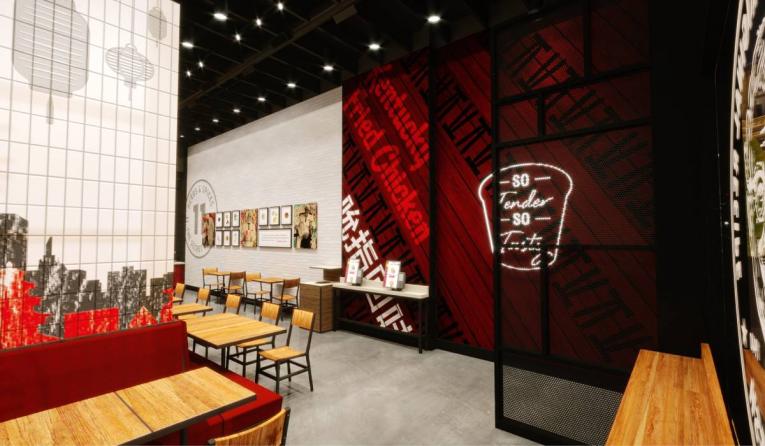 Because urban inline stores are focused on the to-go customer, they will hold somewhere between 10 to 20 seats, including more countertop seating as opposed to the typical four-top tables seen in suburban restaurants.

The latest crop of urban inline stores will include designated signage to direct customers and delivery drivers to mobile pickup areas. In terms of design, the locations will be upscale and reflect the community in which they reside. For example, the Chinatown restaurant will have Mandarin script on the signage and artwork.

When Cahoe says his development team sees a big opportunity in underrepresented and underpenetrated trade areas in the urban core of the U.S, he isn’t referring to central business districts that’ve suffered a slower recovery. He means neighborhood markets like Upper Manhattan and other places where the consumer doesn’t have great access to KFC.

“[The focus on urban] may be a little bit counterintuitive right now, as we’re still in the pandemic,” Cahoe says. “I think the key point for us is we’re talking about urbanicity and neighborhood areas where the consumer lives and plays and has other daily needs. Take New York as an example. Your borough in Upper Manhattan, you’re taking mass transit into Midtown and Lower Manhattan etc. for work. That commute may not be going on, but those people are in the areas that we’re talking about where they live and have other retail and other competitors for their daily needs.”

“So the density and diversity and the consumer that’s in these areas, we think our brand fits very well and is a massive growth opportunity for us,” he adds. “Contrast that with the realities, we’re not very penetrated with our locations in these areas today.”

Because urban inline stores are focused on the to-go customer, they will hold somewhere between 10 to 20 seats, including more countertop seating as opposed to the typical four-top tables seen in suburban restaurants. The units will range from 1,400 to 1,800 square feet compared to the suburban fleet, which averages around 2,000 square feet.

Capital expenditures are usually lower for urban inline locations versus a freestanding drive-thru because there’s no site work involved; it’s more of a retrofit with adding equipment, signage, and other types of materials. On the operational expenditure side, rent can be relatively expensive in certain markets like New York, so occupancy costs may be higher than a standard KFC. At the same time, there are offsets, like not having a drive-thru and different labor deployments.

“The urban inlines are full menu, and designed and laid out with the operating platform and storage to produce the same capacity and the same sales volumes—and higher—than a standard prototype,” Cahoe says. “There’s an expectation of the same or better performance as anywhere else in the U.S.”

When it comes to real estate availability, Cahoe says the early hypothesis that a lot of land would be available due to the mass closure of restaurants is true for certain asset classes. However, that hasn’t been the case for drive-thru, since there’s been growing competitive interest in the channel. Not just from traditional fast-food players, but from fast-casual concepts, as well (i.e. Chipotle, Sweetgreen, Qdoba).

For urban areas specifically, the KFC executive explains that it depends on the market and the nuances of the markets. In some cases, rent may be down because of a high closure rate. In other instances, costs may be holding steady—if not increasing—because there’s so much interest in the market.

“I do think that we are seeing some improvement in space availability in the urban environment where other retail uses or other maybe casual type of restaurants have closed,” Cahoe says. “That then creates an availability and inventory of real estate from a second-generation standpoint. That makes it more readily available to penetrate versus pre-Covid. Rents are really dependent on the trade area and the dynamic from an urban inline standpoint.” 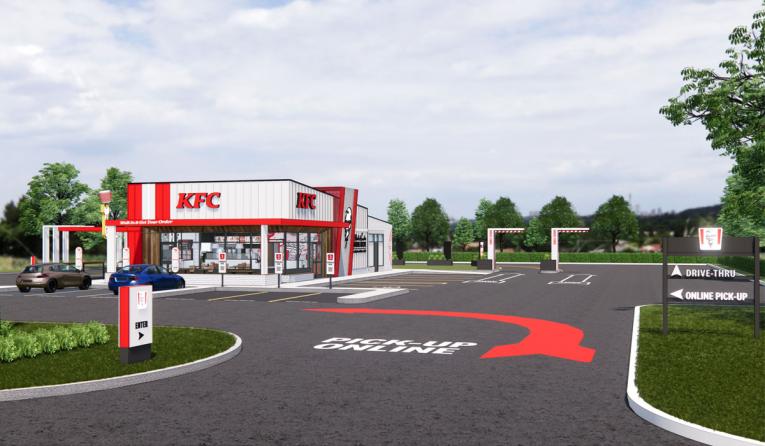 “That’s the opportunity out there for us today,” says KFC Chief Development Officer Brian Cahoe. “And as our digital learnings continue, as that channel mix continues to go up and presumably in the U.S. the consumer gets to be more and more and more digital savvy as we go forward, that’s only going to increase and accelerate opportunity in the urban.”

Urban growth is accelerating, but KFC still expects suburban-based drive-thru locations to be the primary form of growth going forward. In November 2020, the chicken brand unveiled a Next Generation prototype featuring a digital single-entry-point cubby system for mobile and delivery orders, self-service kiosks, curbside delivery, parking and signage for delivery drivers, and a drive-thru lane dedicated to mobile orders.

Cahoe says KFC has a solid group of franchisees signed up to be part of the initial testing later this year. There’s around 20 projects in varying stages of development, including the first ones under construction right now.

“Very similar to the rest of the conversation, we now have our digital channels in place as we continue to learn and make improvements on that front,” Cahoe says. “We’re excited about those prototypes as they’re designed from the ground up to be off-premise focused and efficient for delivery, carryout, mobile order, quick pickup—those type of things. We’re excited to see those come out, get those initial learnings, and we’ll continue to evolve and improve and add that digital integration from there.”

As KFC approaches the 4,000-unit mark in the U.S., Cahoe believes there’s a clear line of sight to return to 5,000, a level the brand hasn’t been at since 2011. With the strength of digital, remodeling, and same-store sales leaping nearly 20 percent on a two-year basis, the company feels it has plenty of whitespace across different asset classes and markets.

“That’s the opportunity out there for us today,” Cahoe says. “And as our digital learnings continue, as that channel mix continues to go up and presumably in the U.S. the consumer gets to be more and more and more digital savvy as we go forward, that’s only going to increase and accelerate opportunity in the urban.”