With the easing of the COVID-19 pandemic and vaccinations readily available, more grocery shoppers feel comfortable returning to stores, a new survey by The Feedback Group showed.

Over four times as many consumers plan to shop more often in a grocery store this year versus those who plan to shop less, according to The Feedback Group’s Grocery Shopper Intention Monitor, released yesterday. Of 2,250 consumers polled, 40% said they plan to shop more at a physical store for groceries over the next 12 months, compared with 9% reporting they’ll shop brick-and-mortar locations less. Fifty-one percent plan to go to stores for food shopping at the same rate as they do now.

Preferences for in-store grocery shopping varied across demographic lines, the Lake Success, N.Y.-based researcher said. Among urban consumers, 44% said they aim to grocery-shop more often at stores, exceeding the percentages for suburban (40%) and rural (34%) shoppers saying they’ll do so. Fifty-eight percent of Generation Z customers expect to do more food shopping at brick-and-mortar stores, compared with 49% for Millennials, 42% for Generation X and 32% for Baby Boomers.

Demographically, those who plan to shop less at physical stores for groceries are led by Millennial (15%), Gen Z (14%) and urban (14%) consumers, the study revealed. 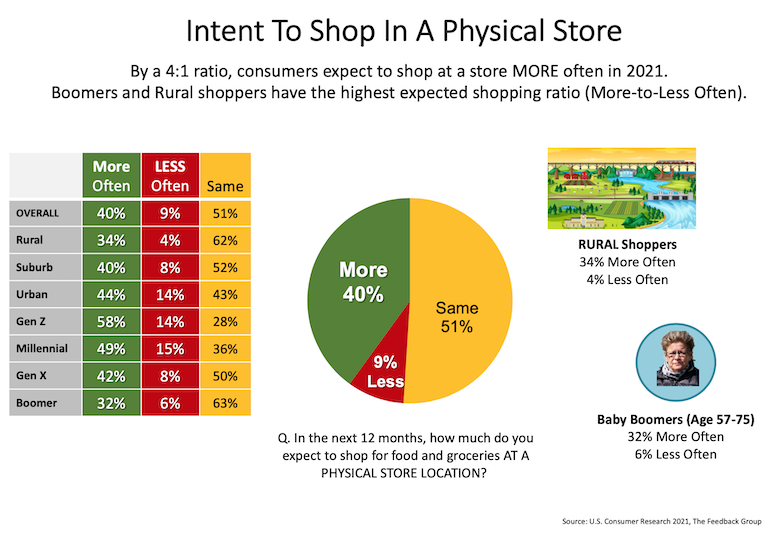 The Feedback Group’s Grocery Shopper Intention Monitor, a new report, tracks expected future grocery shopping in stores and online as well as among specific retailers. The study polled 2,250 consumers who shopped any food store or online provider for food or groceries at least once the past 30 days, including 1,250 in-store and 1,000 online grocery shoppers.

“As we look forward, our research reveals that many shoppers anticipate returning to shopping in stores for food and groceries across a variety of formats,” Brian Numainville, a principal of The Feedback Group, said in a statement. “As a result, it is important for stores to provide the best possible experience to welcome food shoppers back and retain them.” 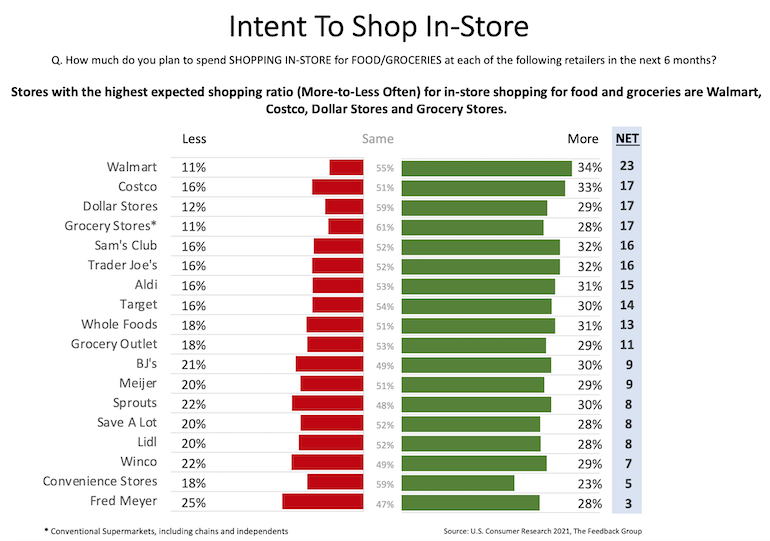 Walmart leads the field of retailers where consumers plan to do more in-store grocery shopping, with 34% of respondents saying they’ll step up their food shopping visits to Walmart stores in the next six months, The Feedback Group reported. Other grocery retailers expected to draw more food shoppers to their brick-and-mortar locations include Costco Wholesale (cited by 33% of consumers), Sam’s Club (32%), Trader Joe’s (32%), Aldi (31%), Target (30%), BJ’s Wholesale Club (30%) and Sprouts Farmers Market (30%). 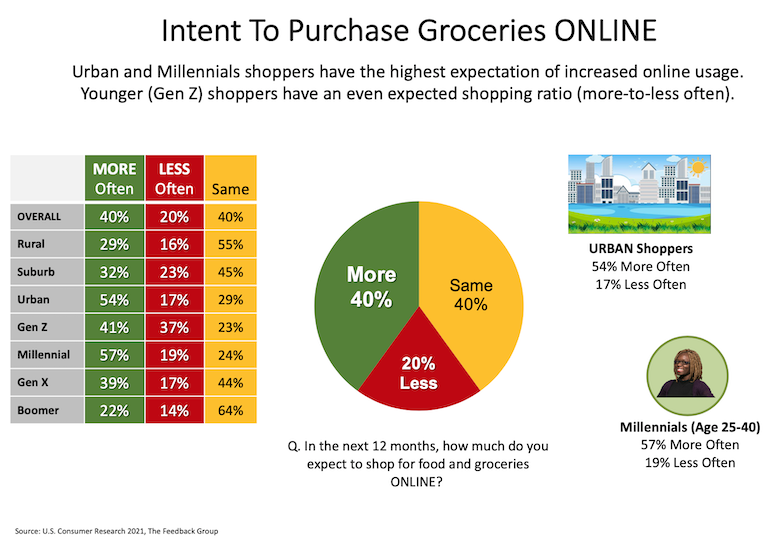 By market type, urban customers show more affinity for online grocery shopping, with 54% saying they plan to do so more often over the next year. That compares with 32% for suburban and 29% for rural consumers. Fifty-seven percent of Millennials expect to do more food shopping online, well above the levels for Gen Z (41%), Gen X (39%) and Baby Boomers (22%). 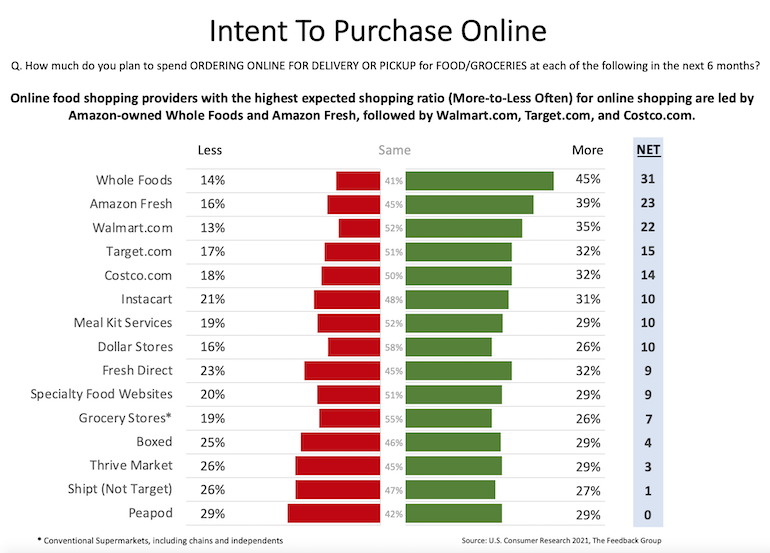 Consumers surveyed named Whole Foods Market (45%) and Amazon Fresh (39%) as the destinations where they expect to do more grocery shopping online in the next six months, The Feedback Group said. They are followed by Walmart.com (35%), Target.com (32%) and Costco.com (32%). By retail channel, 26% of respondents aim to do online food shopping more at dollar stores (versus 16% less often), the same percentage as at grocery stores (versus 19% less often).

“As the findings illustrate, Amazon — both with Whole Foods and Amazon Fresh — appears to have the greatest overall momentum in terms of shoppers expecting to use their online services more often,” according to Doug Madenberg, a principal at The Feedback Group. “Whole Foods also resonates the strongest among urban and Millennial shoppers, and Amazon Fresh also places in the top group of stores among these shoppers, along with Walmart, Target, Costco, Instacart and FreshDirect. Absent from the top group are grocery stores, showing that work remains for the channel to continue to strengthen online offerings.”