The Invincibility of the Pizza Industry For a while there in March 2020, Donatos Pizza president and CEO Tom Krouse wondered how his 58-year-old, family-owned business might survive. A global health pandemic unlike anything seen in modern times, mandated stay-at-home orders, and rampant uncertainty has a way of escalating anxiety.

“It was not business as usual,” Krouse says of the COVID-19 pandemic’s earliest days.

But within a month, business began to take off for the 250-location chain headquartered in Columbus, Ohio. Delivery and carryout orders poured into Donatos restaurants and systemwide sales jumped 17 percent over the previous April. That momentum continued throughout 2020 as Donatos gained more than 2 million new customers, added 300,000 members to its loyalty program, and saw overall sales finish 12 percent higher than 2019.

“Financially and performance wise, it was a great year, but it was stressful,” Krouse says of 2020.

The year of pizza

In the nation’s $44 billion pizza marketplace, Donatos is far from alone in reporting impressive 2020 results.

Wisconsin-based Toppers, a 70-unit chain with a heavy presence in the upper Midwest, saw its comp sales jump 20 percent in 2020, pushing AUV toward $1.1 million.

In labeling pizza the “restaurant hero of 2020,” The New York Times beamed: “Its ease and affordability made it a pandemic staple for many families and a rare bright spot in an industry that has been decimated.”

Pizza’s stability—or rather, its ability to shine—shouldn’t necessarily be a surprise given the nation’s long-standing love-affair with pizza, the category’s operational grounding in carryout and delivery, and its appealing value proposition. For as low as $4 per person, a family could get pizza at their doorstep with various toppings. At a time in which consumers were tasked to figure out new patterns and wrestle with uncertainty in their own lives, pizza’s access, availability, and familiarity spurred success.

“During the pandemic, Americans’ craving for comfort and convenience skyrocketed,” Blaze Pizza president and CEO Mandy Shaw says. “Pizza is the epitome of that … [and] an inexpensive food item that could easily feed families that were in quarantine together and going through a time of financial uncertainty.”

Yet, nothing was handed to pizza during the pandemic. While holding some inherent advantages—pizza, after all, is a product that carries well and a universally beloved comfort food—other foodservice categories from burgers to barbecue to Mexican cuisine chipped away at pizza’s convenience and value plays by developing delivery and curbside pickup options as well as family bundle deals and special offers.

Pizza, however, withstood the onslaught, fueled by the category’s rather widespread and consistent investment in technology that empowered ease and convenience at a time when so many needed exactly that.

After decades of relying on its carryout business, Little Caesars, one of pizza’s big four alongside Domino’s, Papa John’s, and Pizza Hut, was already evolving its operations at the start of 2020 with its ballyhooed introduction of delivery. It was, however, the chain’s 2017 launch of Pizza Portals—heated, self-service mobile pick-up stations that allow for quick carryout of pies ordered through the chain’s mobile app and website—that helped drive its pandemic-era performance.

Beyond leveraging its existing technology, Little Caesars was also very thoughtful in its messaging to consumers.

At the onset of the pandemic, the Detroit-based chain led with safety and shared information around things like oven temperatures and contactless service. Later, as consumers sought control amid uncertainty and a we’re-all-in-this-together mindset took hold, Little Caesars unveiled its Pie It Forward program providing complimentary pizzas to healthcare workers and first responders. The chain donated a million pizzas itself while its customers donated an additional 250,000 more via the chain’s mobile app and website.

Finally, as consumers seemed increasingly willing to hear about offers and menu innovations, Little Caesars reignited its lighthearted and quirky advertising. As the calendar turned to 2021, the chain rolled out its “Big Pizza” campaign emphasizing its value proposition over “fancy” pizza brands.

While many other industry players scaled back hours or menu options during the pandemic, pizza largely charged ahead, especially on the culinary front to generate buzz and attention. Domino’s, for example, introduced new specialty pizzas, such as the cheeseburger pizza and the chicken taco pizza, while Blaze rolled out new culinary innovations like the White Claw Pizza and the Blazin’ Hot Chicken Pizza.

And while the pandemic forced many restaurants to permanently close their doors—and surely pizzerias were not immune to such carnage—Datassential reports that 11,000 restaurants opened during the pandemic. Of those, nearly 2,000 were pizzerias, including 19 Blaze units and 11 Donatos locations.

“We are fortunate to participate in a category that has been resilient and thrived,” Little Caesars’ Klein says. 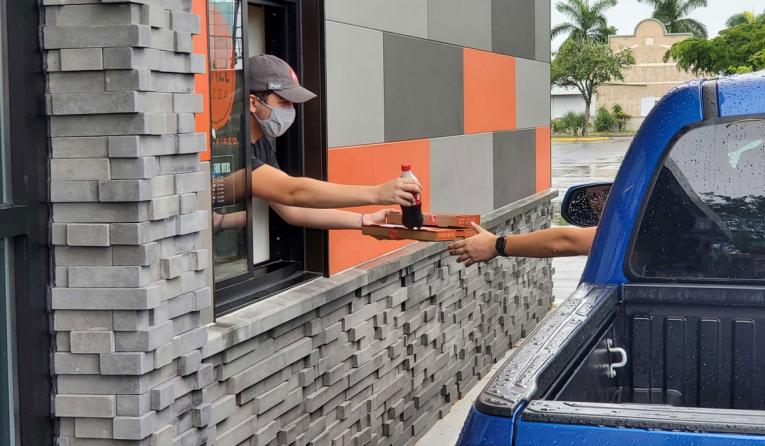 A promising, but not guaranteed, future

Emerging from the depths of the pandemic and all that it brought—uncertainty, angst, and doubt among them—pizza entered 2021 with an energized stride. The category has not only kept pace with its 2020 momentum, but it has accelerated.

Through the first four months of 2021, U.S. pizza restaurants captured a 27 percent increase in foot traffic, according to Zenreach. Those numbers held from coast to coast, too, as New York saw a 41 percent increase in visits to pizza restaurants, Illinois recorded a 42 percent jump, and visits to pizza-peddling eateries in California surged a whopping 77 percent from January 1 through the close of April.

As promising as post-pandemic life has been, pizza players understand nothing is guaranteed. Pizza remains in a competitive battle with quick-serves, full-service restaurants, grocery, and virtual concepts for its share of the stomach. Yet even more so, delivery, which pizza monopolized for so long, has been democratized and mainstreamed, digital ordering is now table stakes for just about any quick-service concept, and pressing labor woes continue to challenge operations and profitability.

“All pizza chains need to look beyond pizza as where consumers may drift off to,” says Klein, though he believes pizza’s compelling value proposition, especially for families and groups, remains a competitive edge. “I don’t think value is ever going out of style.”

To be certain, pizza remains largely confident and optimistic as the nation marches back to normalcy.

Amid the pandemic, Toppers earned business with families as the traditional drivers of its business, including catering, late-night orders, team sports, and business lunches, withered. As those core customers returned in the first half of 2021, Toppers has managed to maintain its family business as well.

“We see tailwinds and a promising environment,” Gittrich says.

To that point, Gittrich believes pizza’s headstart with delivery and digital bodes well for the category’s future, though he acknowledges Toppers and its pizza brethren must resist complacency. That is why Toppers has invested in more engineers and data analysts to help propel its growth on the digital ordering side, which Gittrich expects to account for 90 percent of sales in three years.

“This is a changed environment for sure, but there’s no doubt our category is well-positioned for the new environment,” Gittrich says. “Delivery has climbed from the day I got in this business 35 years ago and it’s not going back. Same with technology. This new environment is not temporary and we’re investing against that at Toppers.” 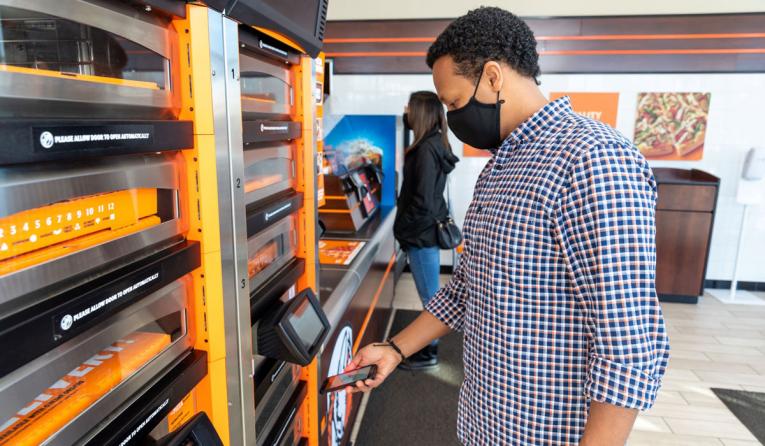 The plan to thrive

Most immediately, pizza brands are focused on addressing a labor environment that Little Caesars’ Klein terms “a competitive war on talent.”

“People want to work at a place where they feel valued and cared about, and that’s going to be incredibly important as we get out of these challenging times,” says Krouse, whose company aims to hire at least 2,500 new employees this year, including delivery drivers, hourly associates, and managers.

Though Blaze leadership expects the labor hurdle to be temporary, the company has nevertheless invested in a labor case study to meet consumer demands and improve its operational efficiency.

“This, along with a revamped mobile app and culinary innovations, will help Blaze build off the momentum that was created during the pandemic,” says Shaw, whose company looks to grow from 340 store locations to north of 800 units by 2025.

Pizza was able to succeed during the pandemic, Krouse and others contend, because the category, much as it has throughout its history, did not succumb to the status quo. Pizza perfected delivery as other categories sat on the sidelines for decades; it invested in digital ordering tools and restaurant technology quicker and more aggressively than many of its peers; and it has consistently trumpeted its value, convenience, and standing as a beloved comfort food. When the pandemic hit, it leveraged all that to flourish.

To move forward in 2021 and beyond, pizza will need to apply that same forward-thinking mindset, especially on the culinary side as consumer tastes and preferences evolve.

“I believe there’s a certain residual of business that will continue in delivered food, so the variety of choices and healthy options will be important,” Krouse says. “People are looking for optionality and have more access than ever to different choices, so the pizza category will have to respond.”

To that end, Donatos debuted a cauliflower crust pizza in February 2020 and added cauliflower wings to its menu earlier this year. The chain is also working on a plant-based sausage. Years ago, such innovations would have seemed more joke than reality.

“We have to be able to listen to people and be more aware,” Krouse says. “We’ve had a nice run of late, but we know we cannot rest on the same old, same old.”