Economies may be reopening and in-restaurant diners returning, but Yum! Brands sees the bigger picture.

The KFC, Pizza Hut, Taco Bell, and The Habit Burger Grill parent knows the future lies with digital and off-premises, and it’s doubling down. The quick-service conglomerate earned a Q2 record of more than $5 billion in digital sales—35 percent higher than last year. And for the first time, Yum! captured $20 billion in digital business on a trailing 12-month basis.

Each brand exemplifies Yum!’s overall digital aim. For example, Taco Bell U.S. reached the one-year anniversary of its rewards program, which has fueled a “significant uptick” in frequency and spend per visit. Active customers in the rewards program have increased their spending 35 percent compared to their pre-loyalty behavior. In addition, KFC U.S. launched an internally built e-commerce website and app early in 2021, replacing a previous third-party solution. Because of that change, KFC’s digital sales in 2021 will soon surpass last year’s total, the company said.

When it comes to Pizza Hut, Yum! spent the past few years shifting the chain away from dine-in, in favor of an off-premises, digital-focused operation. The results have been more than favorable as sales outside the four walls in the U.S. grew 18 percent on a two-year basis in the second quarter. And at The Habit, digital sales continued to mix more than 35 percent—only a modest decline from Q1 as dining rooms reopened.

“It’s really hard to single out which part of the business is going to benefit most from digital, because all of our brands are very rapidly becoming digital brands,” Gibbs said during the company’s Q2 earnings call. “You’re seeing that in the numbers. Obviously, the brands like Pizza Hut that started with a bigger digital base of customers, launched loyalty first. They’re getting a benefit because it’s central to what they do.”

“But really on a growth basis, it’s the brands like our other brands that started up from a smaller base that are really getting a big benefit, and it is both the U.S. and an international play,” he added. “It’s widespread, and we do think it can fuel the business for a long time to come.”

Thanks in large part to the digital explosion, each of Yum!’s concepts experienced positive two-year same-store sales in the second quarter. KFC domestic stores increased 19 percent on a two-year basis—with a notable boost from the new chicken sandwich—while Pizza Hut units in the U.S. lifted 9 percent over two years, including the impact of 1 percent of stores being temporarily closed.

Gibbs said it best, “Digital is one of those things that has no downside.” That’s why Yum!’s operators are developing at a record pace. In Q2, the company opened a net of 603 locations, a new record for the second quarter. Right now, Yum is feeling confident, which is why the company increased its guidance from 4 percent annual unit growth to between 4 and 5 percent. 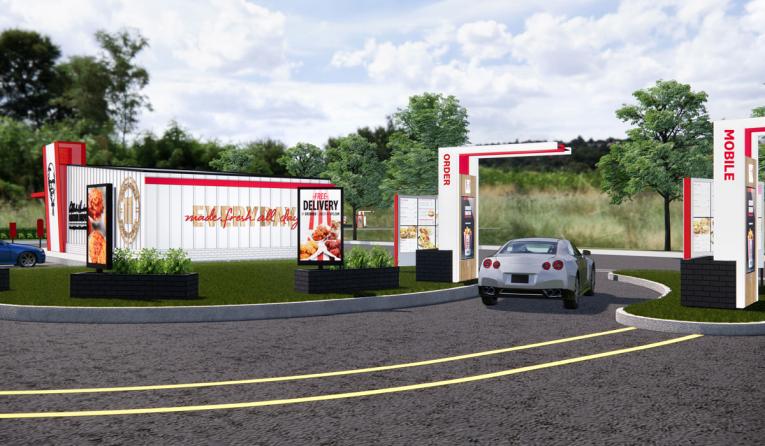 Gibbs pointed out that brands are now building assets that leverage the acceleration of digital. In 2020, Taco Bell introduced the Go Mobile restaurant, a concept featuring curbside pickup, dual drive-thrus with a priority pickup lane, and concierges called “bellhops” to maximize the ordering journey.  In November, KFC unveiled its “restaurant of the future,” which boasted a modernized exterior, a single-entry-point cubby system for mobile and delivery orders, curbside delivery, a drive-thru lane for mobile orders, and self-service kiosks. And in March, Pizza Hut announced “The Hut Lane,” a dedicated digital order pickup window available at thousands of stores.

“You have a better experience when it’s a digital experience,” Gibbs said. “The average check is higher. There’s labor savings from processing orders on digital. So the link to development is pretty clear, right? It’s going to give you better unit economics when you have higher check and less labor associated with the check and stickier customers, by the way.”

Among those totals, Pizza Hut’s growth is arguably the most remarkable. After closing a net of more than 500 stores in Q3 and Q4 2020, the pizza chain has debuted a net of 170 locations in the past two quarters. Gibbs said the turnaround in unit growth is a sign that Pizza Hut’s strategy to shift to delivery/carryout units is working and that the brand is strengthening.

The CEO noted that more work is to be done to transition the asset base, but the runway is there.

“Through COVID, both Pizza Hut U.S. and Pizza Hut International have continued to drive progress on that front,” Gibbs said. “If we take Pizza Hut U.S. specifically, if you saw last year, we drove a number of closures in the system that did move our mix Delco [delivery/carryout] assets by a few percentage points. So we’re continuing to make progress on that transformation.”

“There is still further to go,” he added. “So we’re going to continue to drive that. But in terms of net unit count, you’ve seen a change in that trajectory. We were actually slightly positive this quarter in Pizza Hut U.S., which we think reflects the improved unit economics in the U.S. that stem from the strength of the brand.” 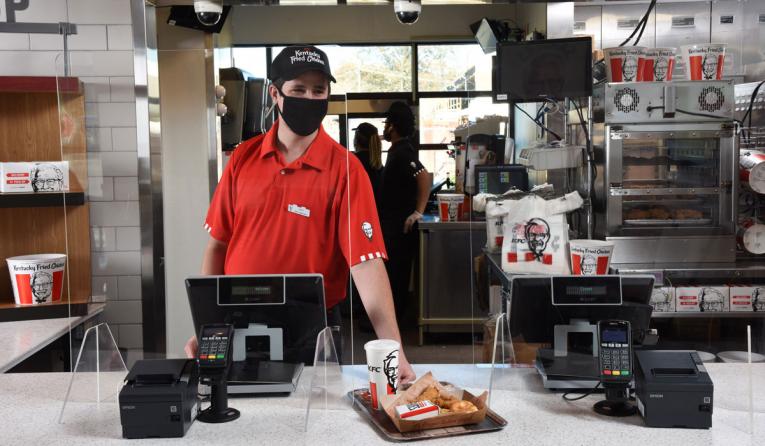 Development and digital are on fire, but the macro-economic challenges remain for Yum! To combat labor issues, the company hosted hiring parties, which have led to a huge uptick in hires. Yum! also launched a “fast apply” option that reduced application times from eight to two minutes. To retain employees, the company has supported workers with paid time off, free family meals, and increased employee development activities. The KFC Foundation recently rolled out a new personal finance program called “MyChange with SaverLife” to boost employee savings.

In terms of commodity inflation, CFO Chris Turner said Yum! is in a better position than most because of its “massive cross-brand purchasing scale” through supply chain co-op RSCS. The company is also confident in the pricing power of each brand as franchisees deal with cost pressures in their respective markets.

“Our franchisees, who are the ones who actually make those decisions in their restaurants, are being very thoughtful about how to [price],” Gibbs said. “They use analytics. They tend to layer these in over time so that they don’t get too far ahead of the consumer. And our brands, obviously, are very smart about how they create mix in the menu.”

“I would say we’ve been very thoughtful and have increased pricing moderately across the brands in the U.S. to deal with this,” he added. “But we’re confident in the ability to continue to pull those levers to deal with this tactfully.”